InClinica is a contract research organization (CRO) that leads companies through clinical trials. It was formed when private equity firm Velocity Fund Partners, which invests in life sciences / healthcare / pharma companies, purchased an existing CRO and rebranded it.

InClinica is headquartered in suburban Philadelphia (serviced by Buchanan Public Relations), but has a strong presence in Malaysia. The Malaysian office had several opportunities for which it needed PR support, including the office’s grand opening and upcoming conferences, as well as establishing the company as an industry leader in southeast Asia.

Buchanan PR introduced InClinica’s Malaysian contacts to the team in the Kuala Lumpur office at Mileage Communications and provided strategic guidance for the short-term project. Following the introduction, members from both InClinica and Mileage held an in-person meeting to discuss strategies and develop a plan. Objectives included:

The project spanned four months and was deemed successful. The team achieved: 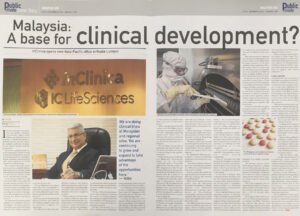